Rugby Golf Club was inaugurated in 1891. Mr Morris Davies and Mr Sedgewick were responsible for forming the club and it is to these men that many generations of Rugby golfers owe a debt of gratitude.

Before 1935, the golf course was split. The six holes on the land on the North side of Clifton Road (only very recently converted to housing) were abandoned and incorporated on land that was leased from Rugby Town Council, together with land adjoining the main portion of the course owned by Mr. Lee. This made the course far more compact. The new lease negotiated with the Council then put the club on a more permanent basis.

In 1941 three of the 18 holes were requisitioned for agricultural purposes to help meet the war effort. Towards the end of 1947, with no hope of regaining these three holes on the East side of the canal, it was decided to construct a course with 18 holes on the remaining land. Accordingly, James Braid, the well known golf professional and course designer, was invited to help the club. He visited in 1949 and a comprehensive scheme of improvements was agreed. The reconstructed course was officially opened on the 14 May 1949 with an exhibition match.

The course has seen many changes over the years and is thought by many professionals and amateurs alike that although not long, 5614 yards, par 68, its many natural features make it a thinking mans course. One of its feature is the now redundant railway viaduct built circa 1885.

It is a friendly club and together with its splendid layout makes it well worth a visit. 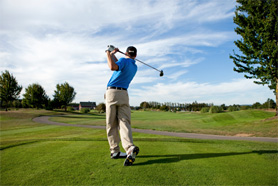 “Great challenging course and an amazing clubhouse atmosphere. Will be joining next year.”